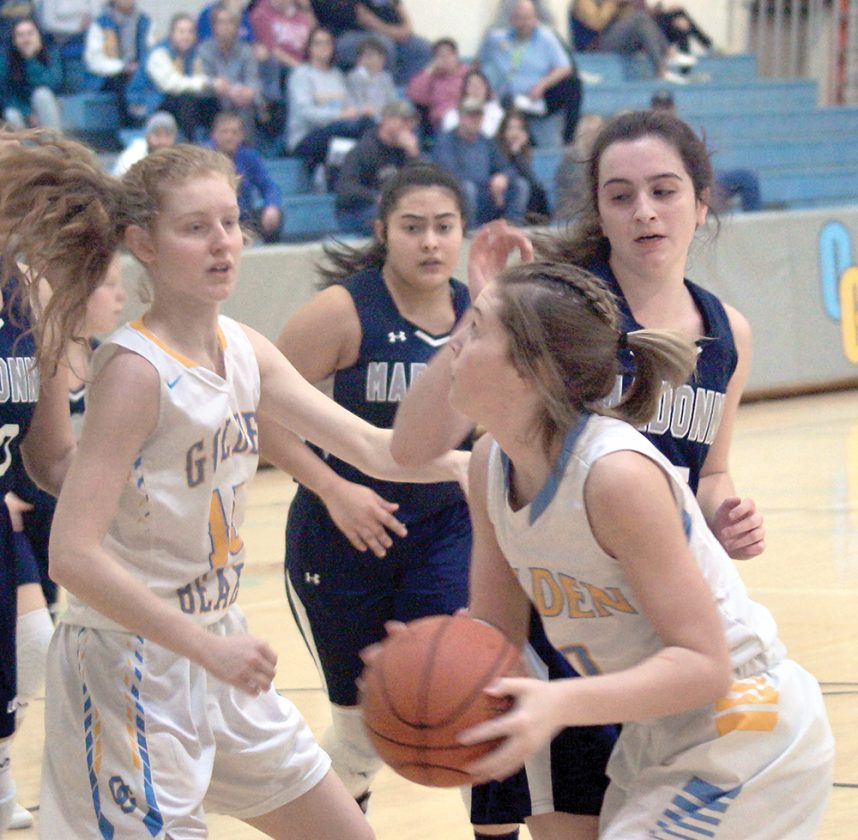 NEW MANCHESTER — The Oak Glen girls basketball team used a smothering full-court press to build a 16-point lead late in the third quarter, but wound up having to ward off a furious Madonna comeback that came within six points midway through the final period to record a 50-37 win Wednesday night inside the Oak Glen Fieldhouse.

Along with the defense, which resulted in 25 Blue Don turnovers, it was the Golden Bears’ balanced scoring attack that helped get Scott Wylie’s crew back to .500 as it gets into the second half of the season.

“I was thinking that we need a bucket,” Wiley said of his thoughts when Madonna cut the deficit down to six points. “That’s been happening all year, though. We just have trouble scoring sometimes. The last few games our defense has been creating our offense. Then we get slowed down and we have trouble getting back into our offense.

“I was just worried about that Madonna team. They are big and physical. I was worried until the final buzzer because I know they just keep coming at you. They have good scorers and they do a good job on that pick and roll.”

Madonna took the early lead as Anna Backel got a layup off the opening tip and Jazzy Melnyk drove the baseline for another layup. After that, the Golden Bears used seven Madonna first quarter turnovers to get a 10-9 lead going into the second quarter. Their full-court pressure began to control the tempo of the game and doubled up the Blue Don scoring in the second quarter for a 22-15 halftime lead.

By the end of the third period, Oak Glen had a commanding 36-24 lead, but the Blue Dons weren’t ready to throw in the towel as they went on an 8-2 run to start the final quarter. It was Melnyk that led the charge, making two very nice passes, first to Alaina Moore for a layup and to Madison Costello for a deuce and the third time down the floor, she swished a jumper of her own. With 4:34 left in the game, Oak Glen’s lead was down to 38-32.

From that point, Oak Glen went on a 12-5 run to close out the game.

“Oak Glen did exactly what we thought they were going to do,” said Madonna coach Rodney Boniti, whose club now is 8-3. “They were going to attack us and put pressure on for 32 minutes. They are effective with that full-court press. They try to wear you down. We watched them the other night against Toronto and if you don’t take care of the ball against the press break, that’s where they score. They went on a spurt in the first half and another spurt in the second half and that was just too hard to overcome.

“I think there was about four-and-a-half minutes to go when we took a 16-point deficit down to six. The next three possessions we got a fast break but turned it over, in a half court set we threw it out to midcourt and they got a layup going the other way and we took the ball out of bounds with them intercepting the pass right under the bucket for another layup. It was a six-point swing in those three possessions and we were back out of it.”

The Golden Bears now have won two of their last three games to up the record to 6-6 and that puts them into the race for one of the four spots in the 4A division of the OVAC Tournament. They are in a battle with Martins Ferry, East Liverpool and Beaver Local and they play two of those schools at home next week.

“I think after we played the Steubenville Central game, we decided to keep playing the full-court press,” Wiley said. “That’s all we’re going to do. Even if we lose by 20 we’re going to keep doing it. I told our freshmen to get used to it because when they graduate we’re still going to be playing it. We’ve got some good athletes, but not a lot of good shooters so if we can create layups that’s what we’re going to do.”

Seven of the eight girls Wiley used in the game got into the scoring column led by sophomore point guard Maddie McKay’s 15 points, six rebounds and three steals.

“Maddie runs it,” said Wiley “She has some turnovers once in awhile, but I’m not taking her out because she’s so smart about the game. Softball is her main sport, but her parents have coached her all the way through and she knows the game. She knows strategy and what to do and when to do it. So it is nice to have her. She’s much like a Peyton Eckleberry (a former Oak Glen star from several years ago).”

Madonna senior center, Kennedy Martin, who has been out of the Madonna lineup with an injured ankle, was seen on the bench with a cast on her right leg and using crutches. In fact, it was one of her crutches that Boniti gave to a game official to release a basketball that got wedged between the rim and the backboard. Boniti said he hopes to get Martin back in the lineup soon.

Madonna hits the road Saturday to play at Caldwell with a 1:30 p.m. start. Wednesday’s game was the first of five straight home games against rivals. Three of the games are next week beginning with an invasion by East Liverpool on Monday followed by Beaver Local on Jan. 23 and Weir High on Jan. 25.