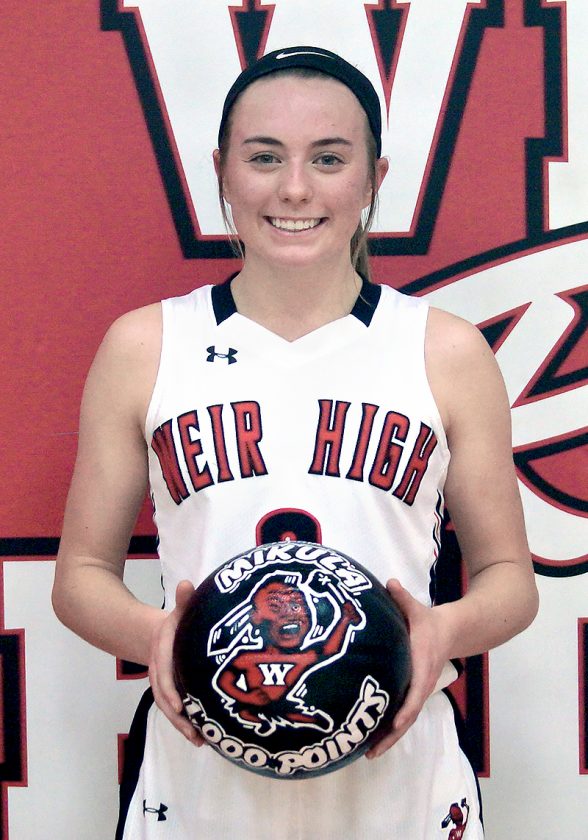 WEIRTON — Stuck one point shy of a milestone for a couple of minutes, Sophia Mikula sent the Weir High crowd into a frenzy every time she touched ball early in the second quarter of Monday’s game.

Three times the crowd was ready to erupt, just to sit back down after Mikula’s layup attempt didn’t go through the hoop. With 4:10 to go before halftime, though, they got their reason to celebrate.

Mikula let a jump shot go and drained it, putting her over the 1,000 career point mark. She went on to add another 14 the rest of the way to lead the Red Riders with 23 points, adding seven rebounds and two assists in a 58-42 victory over John Marshall.

“It means a lot to me,” Mikula said of the milestone. “I have been working a lot on my game. It’s all because of the help of my teammates and my coaches. I’m glad to finally achieve it. It’s not a goal that happens all the time.

“When it happened, my heart was beating out of my chest. It was great to see the reaction from the crowd. My mom was excited. It means a lot to have the support behind me.”

Head coach Rick Stead could not be happier for his standout.

“It’s a fantastic feeling. I’m elated for her and her family,” he said. “Sophia comes to the gym and works hard. She is a leader and had been consistent in her play since she was a freshman. She is a good kid.

“For me, this is the fourth time I’ve got to experience someone that played for us scoring 1,000 points. It means a lot, and I’m sure it means a lot to her and the kids.”

Once the shot went in — giving Weir High (6-7) a 20-18 lead after getting in an early 6-0 hole — and the milestone was reached, his club calmed down and got to work, outscoring the Monarchs (4-8) in the final three quarters to pull away.

“Early on, of course, there was the distraction,” Stead said. “Once all that got out of the way, this is probably the best basketball we have played all year. We played more consistent. The key is shooting, and we shot the ball well.”

Mikula felt the pressure lifted away, too.

“I was glad I got it in the first half,” she said. “I was shaking before that. I thought, ‘Seven points, I know I can get it.’ I just tried to let it come naturally, but I was starting to get nervous. Once I started making some shots, I was able to just start playing the game and not worry about it as much.”

On top of reaching the milestone, Mikula was happy to finally get a win over John Marshall after coming close in recent meetings.

“This means a lot because each year we have had them on the schedule and come close to beating them,” she said. “The last time we played them, we let it slip away in the fourth. We finally were able to pull through.”

Backing up Mikula’s performance were the Aperfines, Bella and Sophia, each reaching double figures. Bella Aperfine finished with 18 points and a game-high five assists (at least three of which went to Mikula). Sophia Aperfine netted 10 points. Leah Maley pulled down a game-high 11 rebounds to go with five points.

For John Marshall coach Brock Melko, the toll of a tough schedule seemed to catch up with his team after a good start that saw the Monarchs up 14-10 after the first quarter.

“I think we looked like a tired team,” he said. “It looked like we were trying. Our legs just weren’t there. I think it was most evident on our shots, which all of them were short. I think we have girls that are playing harder than they’ve ever played before, which is a good thing. It’s what we preach every day, but I think it’s taken a toll on our offense.

“We’ve got to get used to it and get it fixed. It’s been a tough schedule all year. We knew that coming in. The reason we make it that way is to be playing the best at sectionals.”

After trailing by four at the end of one, the Red Rider offense got going in the second, outscoring the visitors, 15-7, to open a 25-21 halftime lead. Mikula had 10 of her points in the second quarter.

In the jayvee games, John Marshall took a 50-7 win. The Monarchs were led by Michaela Kobacko with 11 points. Weir High got two points each from Kendall Drobish and Serina Smith.

John Marshall: Has a few days off before hosting Ripley on Saturday.