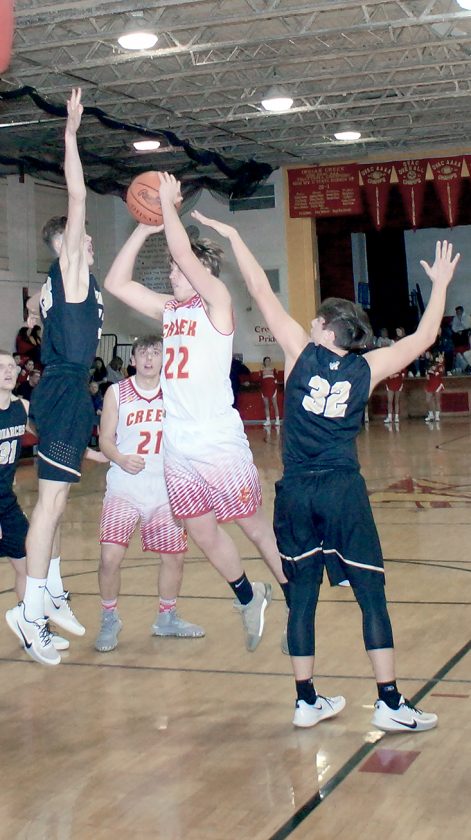 GOING UP — Indian Creek’s Isaiah Vandine goes up for a shot in front of teammate Jacob Wright and John Marshall’s Cole Gilbert and Izac Babiczuk during Friday’s game at Indian Creek. - Andrew Grimm

WINTERSVILLE — The deficit was too much for Indian Creek to overcome.

The John Marshall boys basketball team led by two at the end of the first quarter, and the Monarchs broke the game open in the third quarter en route to a 56-45 victory against the Redskins in an OVAC Tournament consolation pool-play game Friday night on the road.

The visitors turned a two-point lead into a 19-point advantage in the third.

“They just ran their offense,” Indian Creek (2-18) head coach Joe Dunlevy said. “They were not scoring a lot, but we went a period of time where we did not score at all. They are long. They have got some big kids. They blocked shots. We had to find another way to score.”

The Monarchs started to take control of the game in the second quarter.

Fronapfel finished with a game-high 30 points to lead the way for John Marshall. Fronapfel produced 13 points in the second.

Izak Babiczuk collected 13 points to finish second on the team in scoring.

Isaiah Vandine netted a team-high 17 points to lead the way offensively for the Redskins. He was the only Redskins to reach double digits. Jadyn Irizarry delivered nine points in the loss.

“They have nice size,” Dunlevy said. “They have long kids. They have athletic kids. They did the right things. We wanted to go inside and get them into foul trouble, but we were not able to do that. We had a hard time scoring inside.”

The game was close in the first quarter. The Monarchs scored at the buzzer to take a 12-10 lead into the second.

John Marshall began to pull away in the second. The visitors built a 22-11 advantage and end up extended their advantage out to 25-13 en route to taking a 29-20 lead into the locker room at halftime.

The victors gained full control in the third as they increased their advantage up to 19 points – 41-22. The Monarchs outscored the Redskins, 16-9, in the quarter to take a 45-29 lead into the fourth.

Indian Creek mounted a comeback in the fourth.

“I was a little disappointed that they were able to get back into the game in the fourth quarter,” Clutter said. “They were outscored, 16-11, in the fourth. I was not happy about that. We played well enough to win.”

The home team cut their deficit down to 51-42 in the final quarter, but they were unable to get any closer.

“Our kids battled till the end,” Dunlevy said. “They did enough to keep us at bay there.”

Indian Creek is scheduled to play Harrison Central Monday night at home in a make up game before playing Brooke Friday at home in its game of the regular season.

“We are looking forward to it,” Dunlevy said. “I expect there to be a lot of Harrison Central people here. It should be a packed house. It is fun playing when there is a lot of people in the stands.”

The Monarchs won the JV game, 41-22. Roman Gray recorded a game-high 12 points to lead the way for John Marshall, while Grant Neiswonger contributed 10. Three players scored four points to lead the offensive charge for the Redskins.