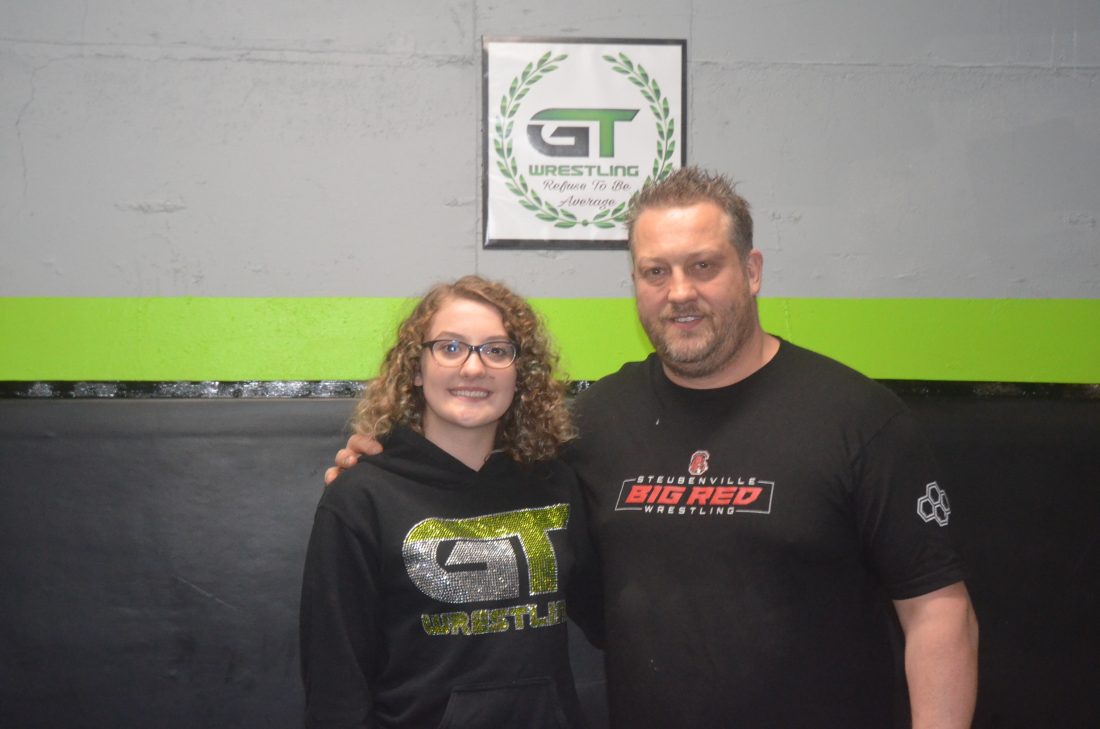 READY TO WRESTLE — Steubenville High School is starting a girls wrestling program for the 2020-21 school year. Tommie Goff will serve as a coach while his daughter, Ciara, will be a freshman on the team. (Photo by Kim North)

STEUBENVILLE — The fastest-growing sport in the nation has reached the Ohio Valley. It was recently announced that Steubenville High School will field a girls’ wrestling team for the 2020-21 school year.

“We wanted to try to establish a team and be the first team in the area. We wanted to try and get things rolling because it’s going to happen,” Blackburn stressed. “It’s the fastest growing sport in the nation and it’s a great opportunity for all of the girls.

“I think if you look throughout the United States there are some unbelievable teams starting up and states having state tournaments,” Blackburn added. “If you look at the state tournament that we had this year there was a huge flood of participation from the girls side and I just think it gives them opportunities to showcase against other females.

“We think we have the athletes to do it and we want to be ahead of the curve so we think that it’s a great opportunity to get started now.”

Prior to the global COVID-19 pandemic, Big Red had 20 girls sign up for the team.

“We’re going to be starting from scratch, but I hope a lot of those girls, if not all of them, decide to come out,” Blackburn added. “If just a couple come out and bring a friend or two with them, that’s all right.”

In the last 25 years, the number of female high school wrestlers has soared from 804 to nearly 22,000. Blackburn said girls wrestling is about 2-3 years away from being a certified sport by the Ohio High School Athletic Association.

“It’s a great feeling,” Goff said. “When my daughter, Ciara, decided to wrestle I purchased a building in downtown Weirton for a training facility.”

She will be a freshman in the fall and has competed on the Ohio girls national team.

Goff said fielding an all-girls team will be a benefit.

“It’s so tough for the girls to compete with the boys when they get to high school because of the growth of the muscles,” he noted. “Ciara did a good job of going through middle school against the boys. I think she was 24-2 and then she placed fifth in the OVAC Junior High Tournament against all boys.

“There are a lot of opportunities for female wrestlers,” he said.

“We’re up to about 400 girls right now,” he said. “To be the first high school in the Ohio Valley to have strictly a girls wrestling team is awesome. Hopefully, 20 years down the road I can look back and say ‘I was glad to a part of this when it all started.'”

Goff wanted to thank Blackburn and the Steubenville City Board of Education for allowing the startup of the program.

“There are some schools that don’t want to throw money into a program that they aren’t sure about, but the nice part about already having an existing boys program is that you already have the (wrestling) room and the mats. It’s an easy add-on for these schools,” Goff noted. “Granted you have to find the coaches that are committed, and with the girls programs just starting there aren’t a lot of female coaches around.”

There will some costs associated with the program, Goff said.

“We’re going to have to do some traveling because it’s not like they can go to the boys meets and then wrestle. There are tournaments all around the state of Ohio so we’ll have some transportation costs, along with hotels and food.”

“Once we get this program started we will be leaps and bounds ahead of everyone else,” Goff said.

Talea Guntrum, who will be a seventh-grader in the fall, has big dreams in the sport of wrestling. At 12 years, she’s already been a two-time state runner-up in boys wrestling, a state champ in girls wrestling in Ohio and a USA folkstyle national champion.

Goff’s son, Dakotah, was a standout wrestler at Steubenville. He went to Wheeling Jesuit and then coached at Edison for two seasons, one as head coach. He is now a firefighter in Weirton.