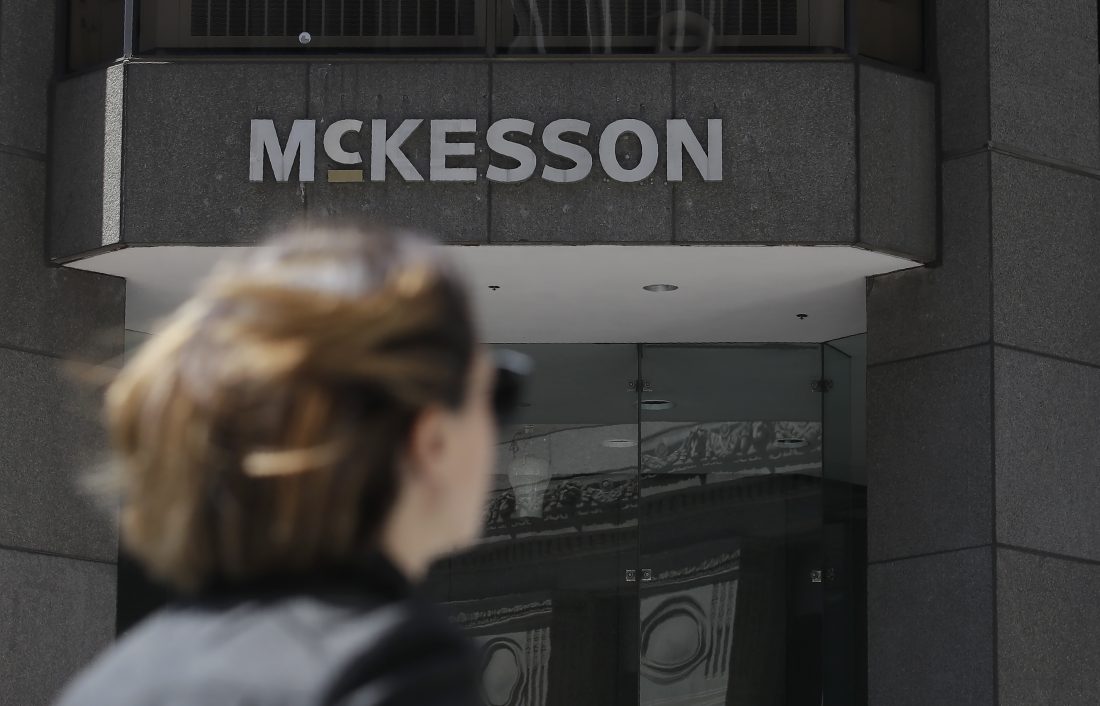 A pedestrian walks across the street from a McKesson sign on an office building in San Francisco, Wednesday. Newly released federal data shows how drugmakers and distributors increased shipments of opioid painkillers across the U.S. as the nation's addiction crisis accelerated from 2006 to 2012. McKesson distributed more than 18 percent of the nation's opioids from 2006 to 2012 — the most of any company — but said it didn't push sales. -- Associated Press

The release of a trove of data from lawsuits over the nation’s opioid crisis provides the most detailed accounting to date of the role played by the major pharmaceutical companies and distributors.

In legal cases across the country, they have defended themselves as being little more than bystanders — dispensing government-approved drugs at the behest of prescribing doctors.

But the data gives a portrait of how the nation’s public health crisis unfolded year by year, with manufacturers, distributors and pharmacies turning a firehose of prescription painkillers disproportionately on rural, working-class communities at the same time the death toll from prescription and illegal opioids was climbing.

Following are questions and answers about what the federal data includes and what it could mean for the lawsuits, in which some 2,000 local, state and tribal governments are seeking to hold the drug industry responsible for the crisis.

Q: What is the data?

A: The released data comes from the Drug Enforcement Administration’s Automation of Reports and Consolidated Orders System, or ARCOS. The government requires the drug industry to report information about the distribution of controlled substances. The part that has been released covers opioid painkillers, showing which pharmacies and medical offices they were shipped to from 2006 through 2012. The federal judge, overseeing litigation in Cleveland, has not decided whether to allow data from 2013 and 2014 to be released.

Q. Why is it being made public?

A: The records lie at the heart of the lawsuits over the opioid crisis. The DEA agreed last year to provide the information to parties in the cases, but the parties initially agreed to tight restrictions on who could see it. While lawyers had access, even the mayors and county officials who decided to sue could not. The Washington Post and HD Media, which owns newspapers in West Virginia, went to court to make it available to the public, an effort supported by other media outlets including The Associated Press. A federal appeals court ruled last month that it could not be sealed entirely. U.S. District Judge Dan Polster, who is overseeing most of the opioid lawsuits, agreed this week to let it be released.

Q: Who opposed the release?

A: The DEA and the companies that are defendants in the opioid litigation. The DEA said revealing the information could show its law enforcement techniques and make it harder to prosecute cases. The companies argued that the records contain confidential business information and are not subject to federal Freedom of Information Act requests.

Q: What does the data show about where drugs went?

A: It shows that during that seven-year period, 76 billion oxycodone and hydrocodone pills — mostly generic versions — were sent to pharmacies and practitioners across the U.S. In 2012, more than 50 percent more pills were sent than in 2006, according to an analysis by The Washington Post, which was the first news organization to obtain the data this week. The most pills per capita went to areas in the Appalachian region. Some communities, including several in West Virginia and Kentucky, received more than 100 pills each year for every person who lived in the community.

Q: What’s the significance of that?

A: Federal data on deaths related to opioid overdoses shows the places that received the most prescription opioids per capita were also the places with the highest overdose death rates. It also shows that the total number of prescription opioids sent to pharmacies increased even as the number of opioid-related deaths was rising, from less than 18,000 a year to more than 23,000. For most of that that period, prescription drugs were a factor in nearly half of opioid-related deaths. In recent years, opioids have accounted for roughly two-thirds of all overdose deaths each year in the U.S. In 2017, the last year for which official numbers are available, some 47,600 deaths were attributed to opioids.

Since 2012, illicit opioids such as heroin and fentanyl, a synthetic drug that is often mixed with heroin, have driven the death totals. Studies have found that 4 in 5 new heroin users started with prescription drugs, although not necessarily from their own prescriptions. Preliminary data from the U.S. Centers for Disease Control and Prevention released this week shows the number of opioid deaths in 2018 is likely to show a slight decline, the first year in nearly three decades in which the overall overdose total dropped. Still, opioid-related deaths alone are at more than twice the level they were in 2012, and now kill more people than automobile accidents.

Q: What companies were involved?

A: The leading opioid producers over that span were three companies that make generic drugs: SpecGX, Par Pharmaceutical and Activis Pharma. Together, they produced nearly 9 in 10 opioid pills that were shipped to pharmacies. The next biggest drugmaker was OxyContin maker Purdue Pharma, which is often cast as the villain of the opioid crisis but produced just 3 percent of the opioid pills over the span. McKesson Corp., Walgreens, Cardinal Health and AmerisourceBergen were the largest opioid distribution companies from 2006 through 2012. Each distributed at least 9 billion pills, representing 12 percent to 18 percent of the total market. They were followed by other big pharmacy chains.

Q: Does this mean the companies that made or shipped the most pills should be held most responsible?

A: This is what litigation and settlement negotiations will determine. Plaintiffs argue that Purdue and later other brand-name drugmakers were the ones who persuaded doctors to prescribe opioids — a class of drugs known for centuries to both relieve pain and be highly addictive — in higher doses and for more conditions. Lawsuits also assert that drugmakers targeted doctors who overprescribed as a way to distribute even more opioids.

While the generic companies produced the most pills, they did not market them. The distribution companies say they were only filling the orders that were placed, but they also have a responsibility to notify authorities of suspicious orders. The DEA itself was responsible for investigating those reports and also for setting limits on how many opioids could be produced.

Q: Does the release of this data change anything about the lawsuits or negotiations?

A: That remains to be seen. Judge Polster has been trying to get the parties to reach a global settlement, but also has scheduled the initial federal trial for October. The lawyers involved in the case have already been analyzing the data as they negotiate and prepare for trial, so their views might not change. The views of the public and even public officials, however, could be different after having access to the information.

Q: Are there other documents in the case that could affect how the opioid crisis is seen?

A: Yes. More court filings in the case could be unsealed as soon as Friday. Among them could be internal company documents provided to plaintiffs as they exchanged evidence. Also, Polster is considering whether to allow the public release of suspicious activity reports on unusual opioid orders.