Seven answer call to the hall 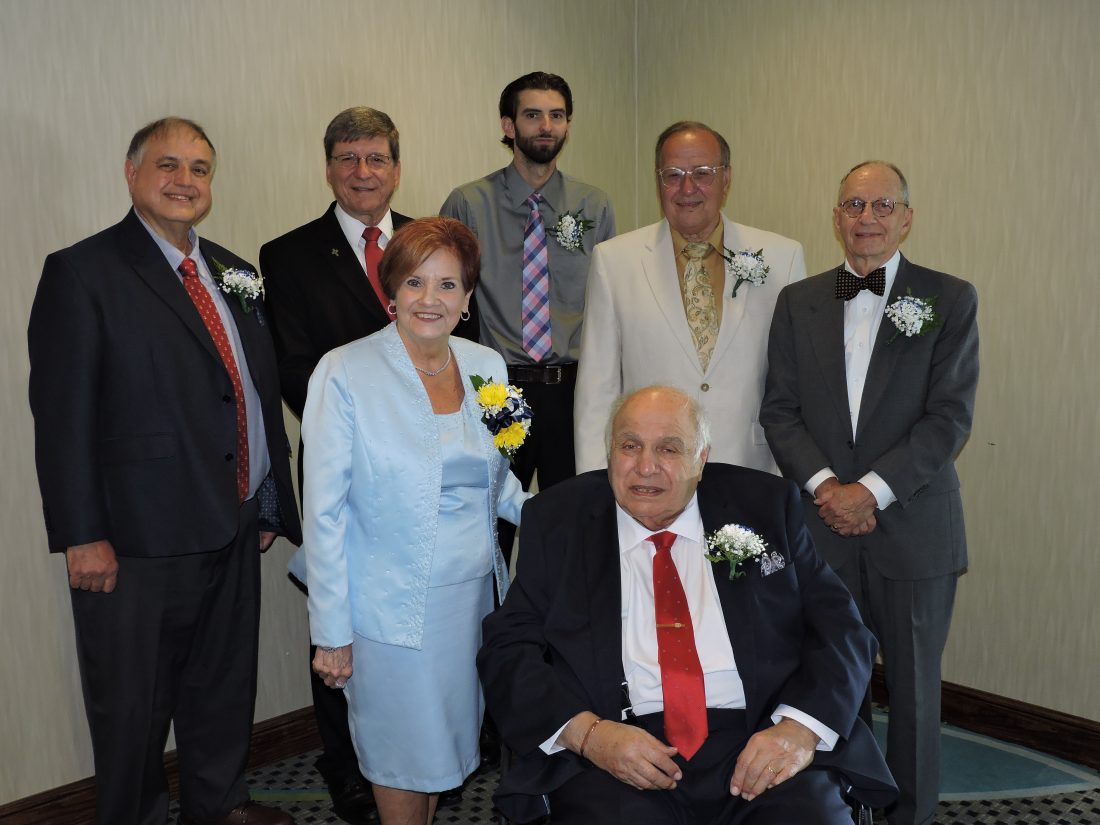 CLASS OF 2019 — The Weirton Hall of Fame holds its annual induction dinner Sunday at Undo’s, welcoming seven new inductees. Members of the Class of 2019 include, in front, Brenda Casey and Louis Kuntupis, and in back, Rik Rekowski, Stephen Greiner, Derek Paul accepting on behalf of his grandfather, the late Herman F. Capito, Dr. Eli Dragisich and Robert Watson. -- Craig Howell

WEIRTON — Seven individuals who have dedicated themselves to serving their communities were honored Sunday with induction into the Weirton Hall of Fame.

Miller thanked the inductees for their efforts to the community, as well as their families for the sacrifices they have made while their loved one was working to serve others.

Dragisich, who it was noted is as well known for his snow sculptures as his work in optometry, thanked his family, explaining he would be nothing without them.

He told of his father, who came to America at the age of 14, married and raised six children while working in the open hearth at Weirton Steel for 35 years.

“Anything I accomplished, I owe to him,” Dragisich said.

He told of his childhood lessons, and the examples of his family which taught him the importance of service to others, and encouraged those in attendance to also serve, saying it provides a purpose and gives life meaning.

Rekowski, the head of the Mary H. Weir Public Library, expressed disbelief at his induction, saying usually he is the one nominating individuals to the Hall of Fame or sitting in the back showing support for others.

Rekowski explained while he considered being a teacher or an architect, he also was influenced by his grandparents who owned a print shop in Pittsburgh.

He thanked the library staff and its board, along with the community which uses the services provided there.

“You don’t realize how many of you are a part of this library,” he said.

“It’s a true blessing,” she said. “I really appreciate this honor.”

She expressed her appreciation to her family, her teachers and all of her students, telling of growing up on Link Street and teaching dance routines to the neighborhood kids.

She also noted a recent reunion for her studio, which had more than 225 former students in attendance.

Watson, a retired architect and local artist, said he was awestruck by being inducted.

“I’m almost at a loss for words,” Watson said, noting art has always been an outlet for him and he is glad to see a growing arts community in Weirton.

Capito, who had been a local businessman and was active in several community organizations, was represented by several family members, including his grandson, Derek Paul.

Paul said he would spend summers with his grandfather, and saw how important the city was to him and how well liked Capito was.

“He took a lot of pride serving Weirton,” Paul said, noting Capito would have been 100 years old this year.

Greiner, who is the current president of West Liberty University, was recognized for his athleticism while a student at Weir High School, where was played football, track and basketball.

“This really is a very humbling experience,” Greiner said, explaining it was made even more special being inducted alongside Kuntupis, who was his first football coach.

He described some of his lessons under Kuntupis, saying it was always about the team and not the individual. He also took a moment to make a presentation of his own, giving Weir High’s current football coach, Tony Filberto, his letterman jacket from the 1963 state champion basketball team.

Kuntupis thanked the Hall of Fame for the honor, saying he always encouraged his students to try public speaking, but that wasn’t helping him Sunday.

This was the 11th year for the Weirton Hall of Fame. Inductees are selected by the committee from nominations of those who have distinguished themselves to benefit the community in six possible categories: philanthropy; public service; music and fine arts; business, industry and professions; education and religion; and sports and athletics.

To qualify, a nominee must be a current or former resident of the city, having lived in Weirton for a minimum of five years since 1947 and making their contributions while living in Weirton.