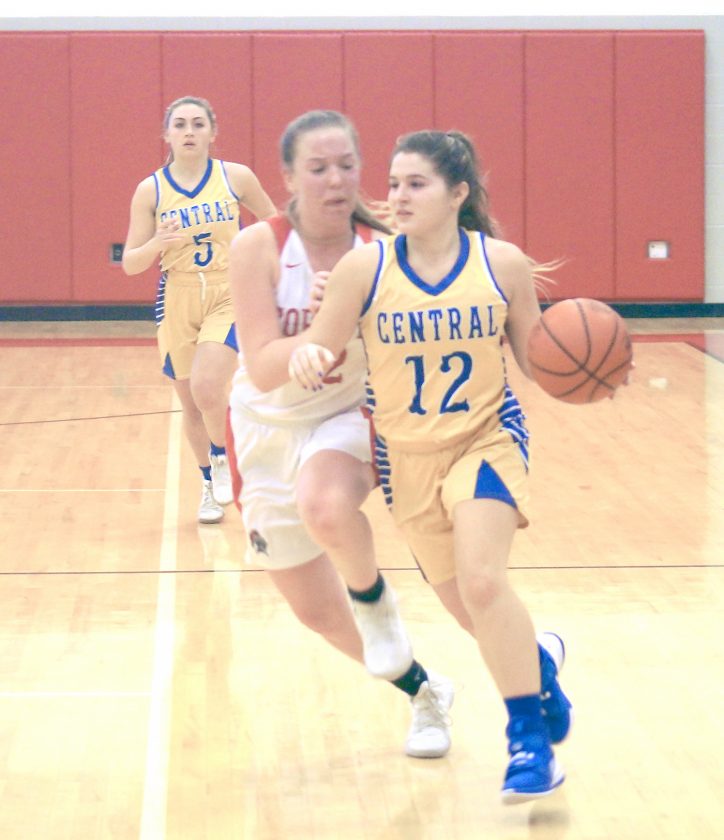 Central, thanks to five Morgan Green points, jumped out to a 9-4 lead after the opening period. The Red Knights, however, battled back and pulled to within two (13-11) on an Abby Liddick field goal. That’s when the Crusaders got hot from behind the arc.

Within 40 seconds, Central swished three long balls (Katie Zatta, Carly Fayak and Green all connected) to make it 22-11. The Crusaders, now 10-5, led 28-19 at the intermission and 38-24 heading into the final frame.

“Those three-pointers were just huge,” said Central coach Jess Looman. “They really shifted the momentum. We had some jitters on the offensive end but after those shots, we seemed to settle down and were able to do a little more with our offense.

“Toronto has really improved since the first time we played them (the Crusaders posted a 53-27 win over the Red Knights in December). Rusty (Hodgkiss) has done a nice job with his team. His girls were prepared, they played hard and they gave us a run for our money.”

Hodgkiss agreed the back-to-back-to-back triples made a huge difference.

“Those three plays probably were the turning point of the game,” he said. “We never really recovered. You could almost feel the energy get sucked out of the building when those shots went down.

“We got to within two then bang, bang, bang. Those were big shots.”

Green finished the game with three triples. She tallied 16 points to share game-scoring honors with Bella Oliver, who also collected 10 rebounds to post her 14th double-double of the season. Oliver also was credited with five steals.

“Morgan has worked hard on her game and tonight, that hard work paid off for her,” Looman said of her junior point guard. “She hit some big shots for us and continued to play well on the defensive end.”

“We have gotten better but we still have a ways to go,” Hodgkiss said. “I am real proud of how far the girls have come since the beating we took at Central the first time we played. We played smarter and harder. We did some dumb things and got a little loose with the ball here and there. For the most part, however, we played with a respectable basketball I.Q.

“I thought we defended well and definitely rebounded better in the second half. We were more physical. We just got annihilated on the boards in the first half.”

The Crusaders, winners of four straight, finished with 19 field goals compared to 13 for the Red Knights. Toronto did drain six of seven free throw attempts.

“I was happy with our defensive performance,” Looman said. “Our goal is always to hold our opponent to under 40 points. We moved the ball well offensively but there still is room for improvement. We have to get better at doing the little things.

“The girls are playing well together and we are playing good team basketball. We have some big games coming up — we have to stay focused and keep working hard to improve.”

Central: Idle until Monday when it visits Madonna.