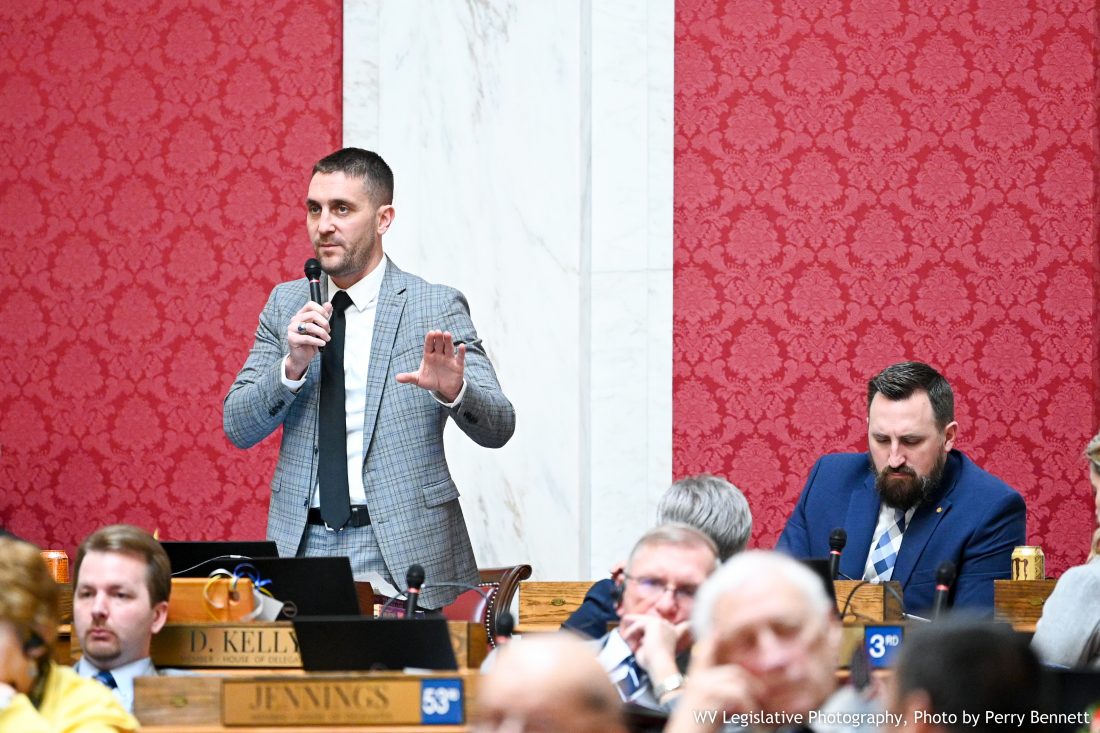 DEBATING THE BILL — Delegate Pat McGeehan, R-Hancock, speaks Tuesday during a discussion of a bill to change exemptions in the state’s certificate of need regulations. -- Photo Courtesy WV Legislative Photography

House Bill 4108, which passed 99-0, would eliminate the need for medical services exempt from certificates of need from having to pay a $1,000 fee to the West Virginia Health Care Authority when they file an exemption application.

Healthcare providers are required to receive a certificate of need from the West Virginia Health Care Authority when they propose to add or expand their services or if their capital and medical equipment expenditures exceed $5.3 million. The law includes a number of exemptions, including non-profit birthing centers, shared health services between two or more hospitals, certain behavioral health services and alcohol and drug treatment centers.

House Majority Leader Amy Summers, R-Taylor, has been a major proponent of eliminating or reducing the certificate of need process. Summers, an emergency room nurse, was the lead sponsor of HB 4108.

“Can you believe…a governmental process that says you’re exempt from this bureaucratic process of certificate of need, but guess what? You got to get government approval first,” Summers said. “That is bureaucracy at its finest.”

According to the West Virginia Health Care Authority, 112 exemptions were approved in 2019. Another 78 have applied for the exemption so far.

“Every single one gets the exemption,” Summers said. “It’s a funding mechanism for the Health Care Authority. I’m going to give you this money and I’m going to tell you you’re exempt even though you’re already listed as probably exempt.”

Delegate Matthew Rohrbach, R-Cabell, is a doctor and chairman of the House Select Committee on Prevention and Treatment of Substance Abuse. He said he was in full support of the bill, even if it meant more competition for his medical practice.

“If every application is approved and all we’re doing is taking away the fee of $1,000 we, the state, impose on people to get what they’re already entitled to under the statute that exists, that is a government shakedown,” Rohrbach said.

The bill had bipartisan support with the entire Democratic caucus voting in favor. Delegate Michael Angelucci, D-Marion, said the current system is unfair.

“This is a very meaningful bill,” Angelucci said. “When we had testimony in the Health Committee, we learned that 100 percent of those hospitals and those healthcare agencies that submitted for an exemption had to pay a $1,000 fee to be told we know you’re exempt, but we’re going to tell you you’re exempt now that we have your money. That’s ridiculous. This is going to save money for the healthcare industry.”

While the bill had no nay votes, Delegate Pat McGeehan, R-Hancock, leveled harsh criticism at Republican House leadership for not pushing for a full repeal of the certificate of need program.

“This is really sort of a worthless bill,” McGeehan said. “Many people in this room…have gone out on the campaign trail and completely advocated for eliminating entirely the certificate of need in this state. This, to me, is a joke. We’re just operating in the margins.”

McGeehan accused Republican delegates of listening to propaganda from healthcare lobbyists who oppose repeal or reduction of certificate of need laws.

“I’ve heard all the different talking points that are usually derived for the lobbying from the hospital association,” McGeehan said. “They’re so fallacious and they’re such a joke, so don’t bother bringing those up in front of me because it’s just so absurd.”

“I take a little bit of offense to my colleague’s comments,” Summers said in response to McGeehan. “It is not worthless to me to get government out of the way of the process of trying to expand healthcare in our state.”