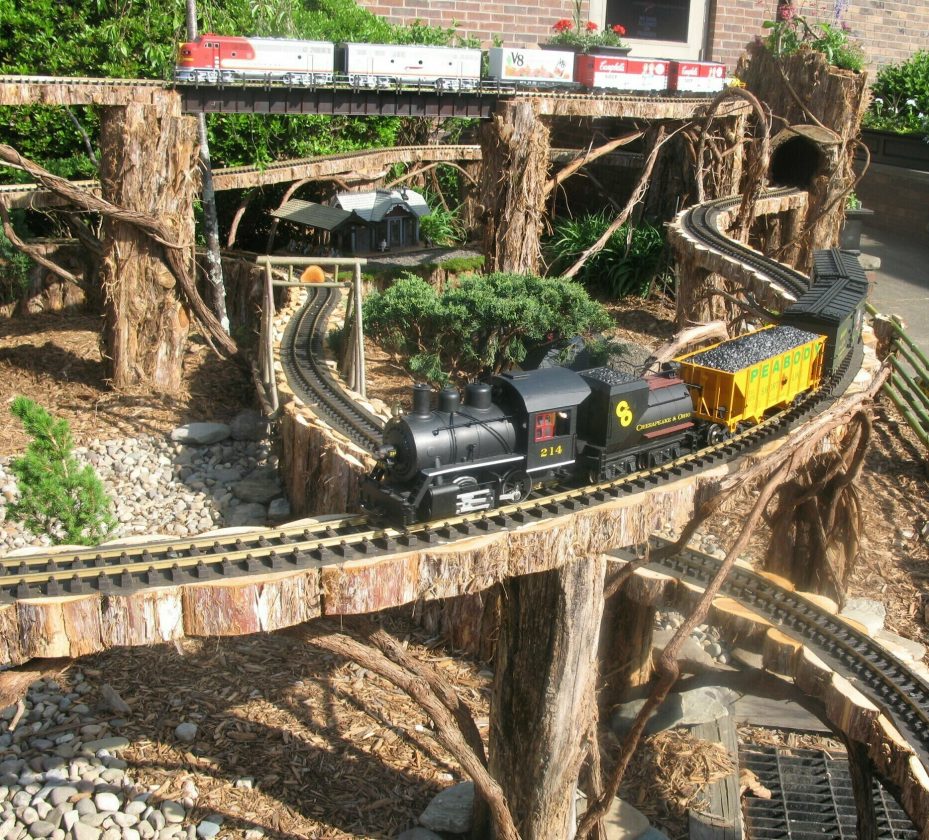 ON TRACK — A train enters a trestle at the outdoor display at Ohio Valley Health Care on Nicolett Road, in Parkersburg. -- Associated Press

PARKERSBURG (AP) — You can hear the train coming and rolling round the bend at a new outdoor display at Ohio Valley Health Care on Nicolette Road.

Construction was recently completed on the 980-square-foot display that includes 220 feet of G gauge track, three trains on three levels, homes, buildings and structures like oil derricks, trestles and tunnels,

The professionally constructed and installed display has yet to have a name, but brings out the oohs and aahs upon first contact.

“I’ve been calling it the Ohio Valley Express, but there’s no official name yet,” said Jay Miller, LNHA, assistant administrator of the facility.

Ron Butcher, 69, is among the residents at Ohio Valley Health Care who likes to watch and operate the trains, and do nothing else except wait for the engines to come out of the tunnel. No better way to while away time, he said.

“Just sitting out there, watching the trains go by,” Butcher said.

It’s nice to sit outside, listen to the whistles and watch the trains go around the track, through the tunnels and alongside the model homes and buildings, Butcher said.

The trains were running within three weeks of design and installation by Stephens Outdoor Railways of Vienna.

The design depended much on the perspective of the residents, many of whom sit in wheelchairs, said Joe Stephens, owner of Stephens Outdoor Railways. Everything was designed at wheelchair height, he said.

G gauge scale is 1/124th size. The cars and locos were made by LGB from Germany, USA Trains and Aristo-Craft and were built for outdoor use, Stephens said.

The trains are on tracks on three levels. Homes, buildings, train stations with people waiting, trestles and a waterfall are placed amid natural landscaping.

The trains can be operated by remote control by the residents, Miller said. The display doesn’t include equipment to change direction or switch the train to different tracks or sidings.

“The residents are already starting to enjoy it,” Miller said.

A dedication of the train display was held recently. The idea for the display started with a conversation with the chef at the facility, Miller said. The prime directive is the display be for the enjoyment of the residents, considered all part of a family, according to Miller.

“We really do look at each resident as a member of our family,” he said.

From a model train on a couple of plywood sheets, not unlike what might be in a basement, it grew to the outdoor display, he said.

“Those pieces of plywood got bigger and bigger,” Miller said.

It’s possible the display could be expanded, but that has yet to be determined, Miller said.

“With our imagination, we can always add to it as time goes by,” he said.